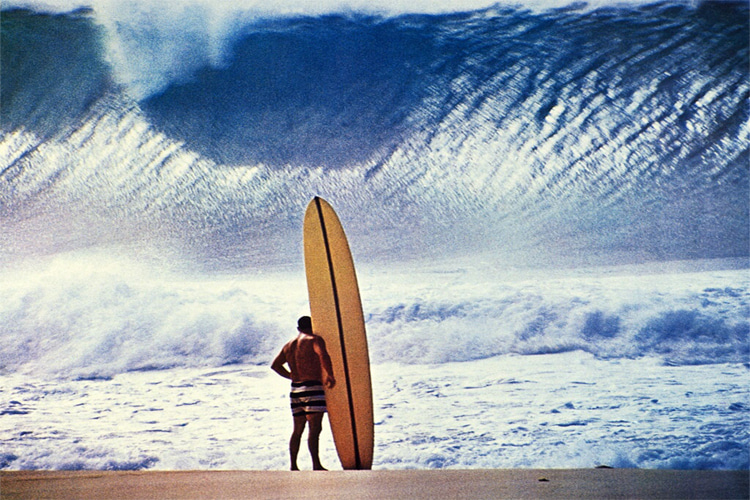 Big wave surfing pioneer Greg Noll has died of natural causes at the age of 84 in Crescent City, California.

He is widely regarded as the first person to ascend Waimea Bay in 1957.

He moved to Manhattan Beach at the age of six with his recently divorced mother. Her name changed after her mother married Ash Noll, a chemical engineer.

Greg started surfing at the age of 10 and quickly became one of the best hot dogs in the Los Angeles area.

Around this time, he learned to shape surfboards from Dale Velzy.

Noll was a member of the Los Angeles County Lifeguards and surfed his first tough waves in the Palos Verdes area, including Lunada Bay.

In 1954, he visited Hawaii for the first time, where he completed his senior year at Waipahu High School.

He got used to surfing in Makaha, and soon he explored the north coast of Oahu and its several legendary surf spots.

His first trip to the Hawaiian Islands changed the way he saw the waves – the bigger the better.

On his next visits to Oahu, he started to tackle the bigger waves at Sunset Beach.

For decades, Waimea Bay has been considered a no-surf zone, even by local Hawaiian surfers.

A new chapter had opened on the famous surf spot, and Greg Noll was ready to embrace surfing for life.

He’s published books and shot movies, but it was Greg Noll Surfboards who made him a timeless icon.

By 1966 his company was the largest surfboard shaping company in the world, producing over 200 boards per week.

At 6’2 “, Noll continued to ride Waimea throughout the 1960s, with some of his waves featured in several surf movies, including the 1966 one”Endless summer. “

Dressed in his prison-style black and white striped surf shorts, Greg remained, for the most part, a free surfer.

Nevertheless, in 1966, he reached the final of the Duke Kahanamoku Invitational.

Three years later, on December 4, 1969, the surfing giant plunged into a 35-foot mountain in Makaha, reached the bottom of the wave, and was pounded by a massive wall of water.

For 20 years, it remained one of the biggest waves ever to be surfed.

“Some of my best friends said it was a wave of death wish. I didn’t think so at the time, but looking back I realize it was probably on the borderline,” wrote Noll in his autobiography.

For him, that was it.

Greg Noll moved to Alaska for a time, then worked for 20 years as a commercial fisherman in Crescent City, California.

In the late 1980s and 1990s, Noll’s historic exploits came to life, and the larger-than-life character reappeared in films and television documentaries.

The big wave surfer started a clothing company – Da Bull – and returned to the fitness room for a one-of-a-kind, limited-edition recreation of his 1950s surfboards.

Greg Noll was inducted into the Huntington Beach Surfing Walk of Fame in 1966.

2021-06-29
Previous Post: How to wax a skimboard
Next Post: TMZ: Kim Kardashian is wakeboarding in Coeur d’Alene, Idaho.