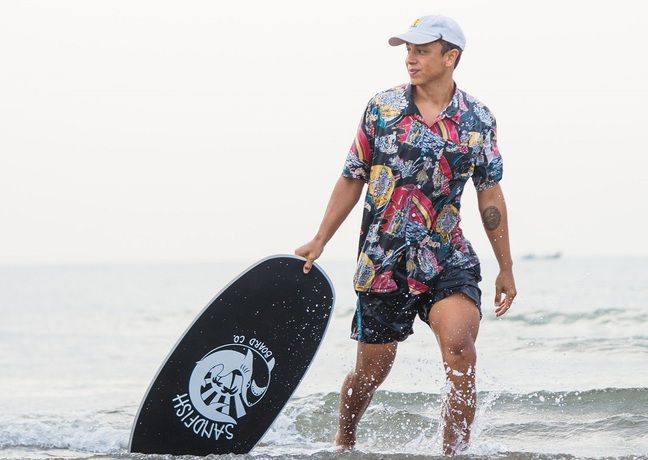 At first, his video went a bit unnoticed. But today, she is creating a buzz. The charm of social networks. More and more of them are sharing it. And it’s true that it’s worth a look. On October 5, Adrien Raza, champion of skimboard (or beach board) quite simply surfedâ€¦ on the reflecting pool of Bordeaux. If some had already tried it, added the spectacular side with many tricks at full speed. With the Place de la Bourse in the background, this gives some pretty impressive images.

Adrien Raza has been skimboarding since the age of 12-13. Since his first waves surfed, like everyone else, by the beach in 2007, he has made it his job. At 26, he is even a quadruple European champion in the discipline. But the young Frenchman, settled in the Netherlands from an early age and very followed on social networks (217,000 subscribers on Instagram), is now seeking to develop a new practice of his sport, in a much more urban environment. For 20 minutes, he looks back on his Bordeaux experience.

How did you come up with the idea of â€‹â€‹surfing in a reflecting pool?

I had been told about it for a very long time. Many people have sent me pictures of this place. I had also seen people “foam” ten years ago. I only came for that for two days. There were also a few locals with me. The video works great because it’s not far from the ideal location. That’s exactly what I’m looking for, unusual places in the city that are recognizable by the general public. My video on the Rotterdam canal was also a bit of a buzz at the time.

How was your race?

Already, we were lucky because there were not many people. It’s more convenient for me. Frankly, it was the perfect place! The water level was excellent for “skimming”. The spot is quite large even if often I am confronted with places that are too small where I have to find myself out of the water. So I was able to gain a lot of speed. And then there is also the environment which is very particular with a spot in the city. It is one of the best places where I have been able to “skim”.

What is the next step ?

The objective is to continue to develop this new practice. Today, personally, I make a living from this sport thanks to sponsors and partnerships, but above all I hope to push more and more people to do so. Many are familiar with the wave skim, but few are familiar with the flat skim that looks like a skateboard. It always attracts more and more people. For my part, I am leaving for the United States in a few days. In Los Angeles, we are going to fill the skatepark with water to â€œskimâ€ it using modules and we hope to find plenty of other somewhat unusual places to continue talking about skimboarding.