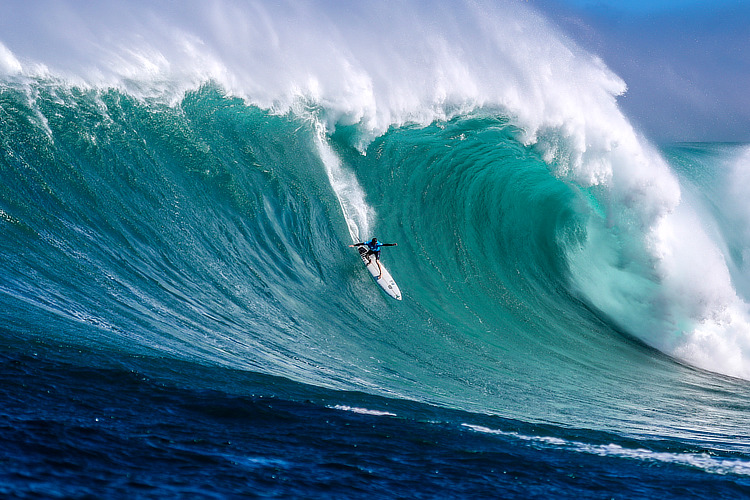 It is both a terrifying and exhilarating experience. Are you ready to be engulfed by the skyscraper-sized waves of Jaws / Peahi?

Jaws is arguably the largest, heaviest, and fastest wave in the Pacific Ocean.

When the extreme surf spot bares its teeth, you hear the thunderous roar of the waves crashing over the deep water reef.

The conditions change quickly here. Subtle changes in the size and direction of the swell can drastically transform the location from a peaceful surf area into a death-defying arena in no time.

Take a look at some interesting facts about the famous Hawaiian big wave surf spot:

2. Jaws was named by surfers John Lemus, John Potterick and John Roberson in 1975 after the Hollywood blockbuster “Jaws”. They were the first to catch waves in Peahi;

4. In the 1980s, Dave Kalama, Mark Pedersen and Brett Lickle followed in the footsteps of the pioneers and sailed Peahi with their windsurfing kits;

5. Jaws became one of the most famous waves in the world in the 1990s when Laird Hamilton and Kalama, alongside Darrick Doerner and Buzzy Kerbox – the “Strapped Crew” – and also Rush Randle, Pete Cabrinha, Mike Waltze and Lickle “invented” towed surfing; 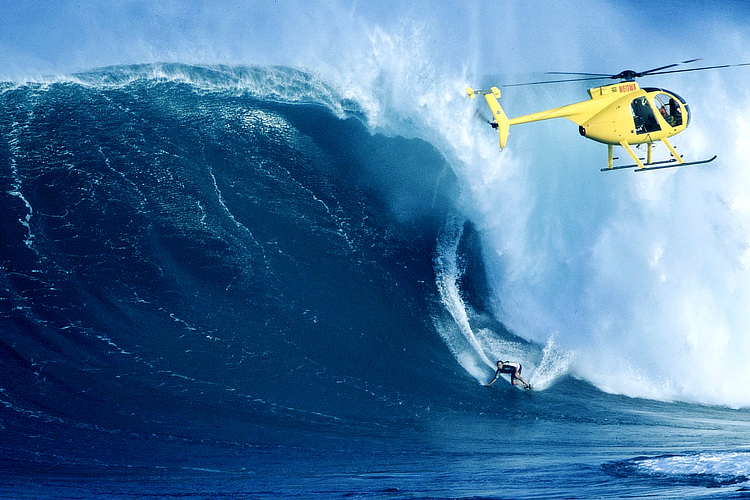 6. Laird Hamilton was the first surfer to be towed into the Peahi wave by jet skis using a surfboard fitted with foot straps;

7. The phrase â€œPe’ahiâ€ has also been adopted to honor the local Hawaiian culture;

8. According to native Hawaiian activist Leslie Kuloloio, the traditional name for the big wave surf spot is Ke Kai ‘o Waitakulu, which means “The tearful eye”;

9. Jaws has been ridden by surfers, windsurfers, kitesurfers, bodyboarders and stand-up paddles before;

10. Peahi is a submerged reef break that operates at all tides;

12. For long left-handers, the swell must come from the west;

13. The best time to surf or watch the big waves crashing in Peahi is between early November and late March;

17. In 2001, Hamilton, Kalama and Doerner acted as James Bond liners in the opening sequence for “Die Another Day”. The action was shot in Jaws; 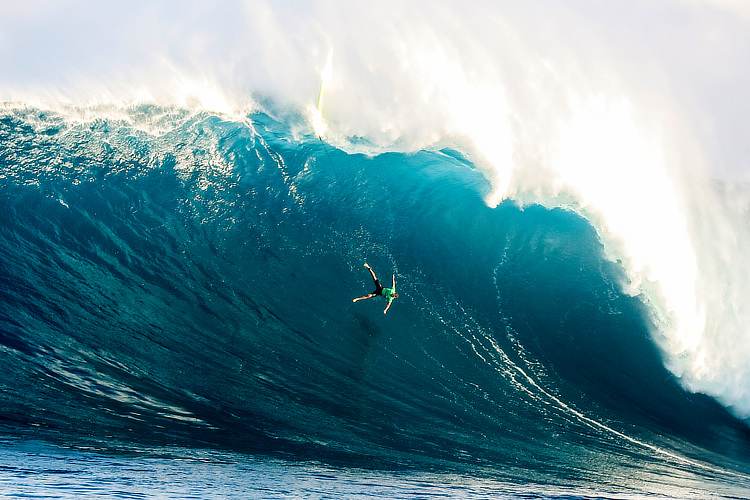 18. In the same year, South African big wave surfer Chris Bertish became the first athlete to paddle a wave of Jaws using only the power of his arms;

19. During the first two decades of the 21st century, Jaws went from a towing arena to a tough big wave surf spot;

20. The dangers of Peahi include a strong sea wind and choppy bumps which sometimes interfere with the surfer’s navigation;

22. Getting caught inside Jaws is one of surfers’ worst nightmares, as they could very well be dragged towards the rocky cliffs;

23. To access Maui’s big wave surf spot, you can launch via Maliko Gulch or paddle directly to the lineup via Hahana Road off of Hana Highway; 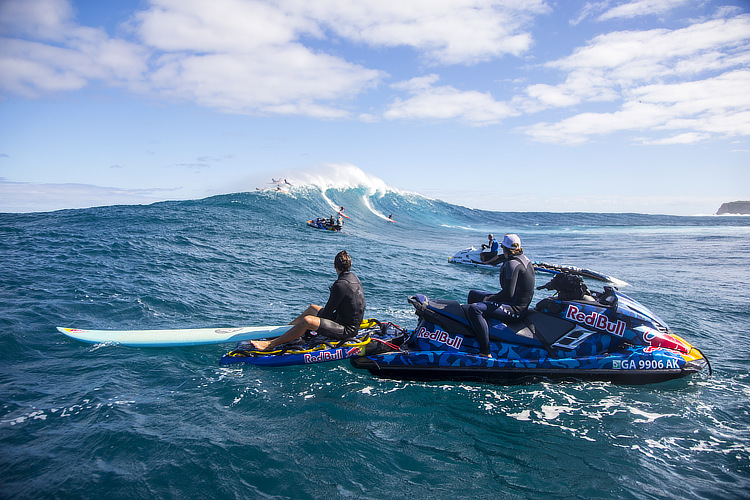 24. If you don’t have a boat or jet ski, the best wave to see surfers tackle the giant water mountain is to stand at the lookout located on the Peahi Cliffs;

25. Are you a spectator? Bring a pair of binoculars and a camera with a telephoto lens to watch and capture all the action;

26. On January 20, 2011, Mark Visser became the first surfer to ride Jaws at night. He used a special board and life jacket equipped with LED underwater lighting technology. The Australian rode 12 moonlit waves;

27. Chuck Patterson was the first athlete to tackle the massive waves of Jaws using a pair of skis;

29. On great days you have to be patient – carefully analyze the behavior of the waves, wait your turn and commit to your chosen one;

30. Once you have fallen into your wave aim towards the west bowl maintain a straight line;

31. A wipeout in Jaws is violent. The lip is heavy and thick but won’t hold you back for long like in other big wave surf spots; 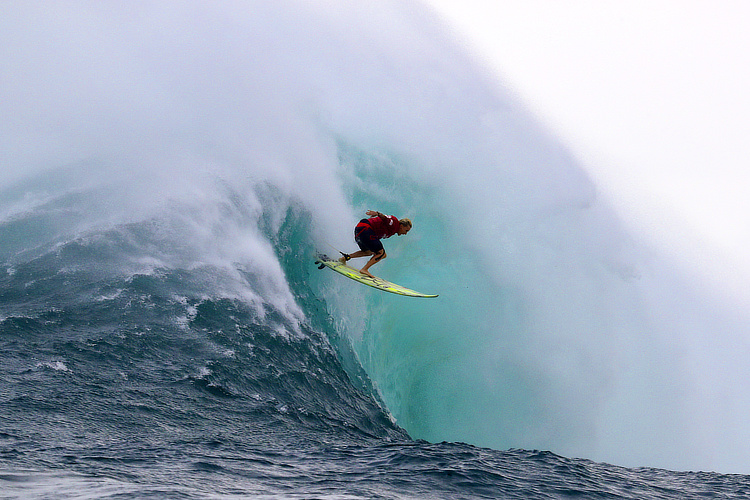 32. Jaws isn’t the only extreme surf spot for men. Keala Kennelly, Paige Alms, Andrea Moller are some of the most experienced women on Peahi on big days;

33. Despite a few close calls and serious injuries, no one has ever died while surfing Peahi;

34. According to veteran wave chasers, the hot water temperature (which reduces panic levels) and inflatable life jackets make it less dangerous for life;

35. In December 2015, Jesse Richman made kitesurfing history after being attacked at Jaws; 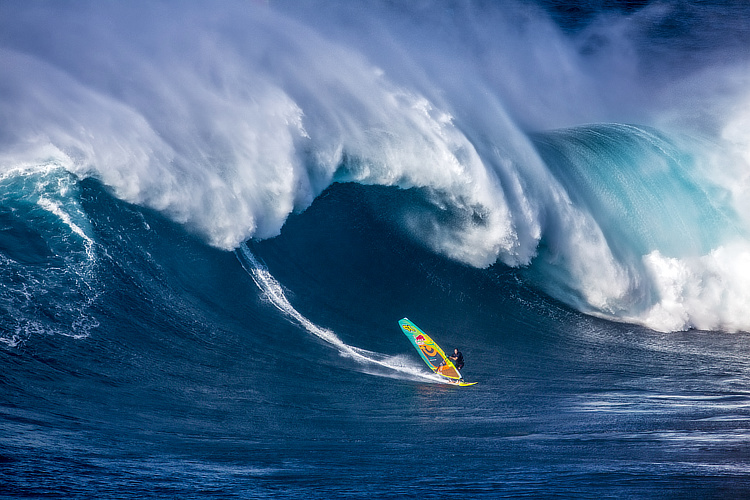 37. No windsurfer has been quite blown up in Peahi. Nonetheless, Josh Angulo, Robby Naish, and Lenny got close on several occasions and may have been lightly covered by the lip of the wave;

40. On February 11, 2016, Landon McNamara missed take-off but managed to continue bodysurfing against a giant wave at Jaws;

2020-01-14
Previous Post: Kitesurfing is becoming a major trend in this unlikely destination
Next Post: Best time for kitesurfing and windsurfing in San Diego 2022