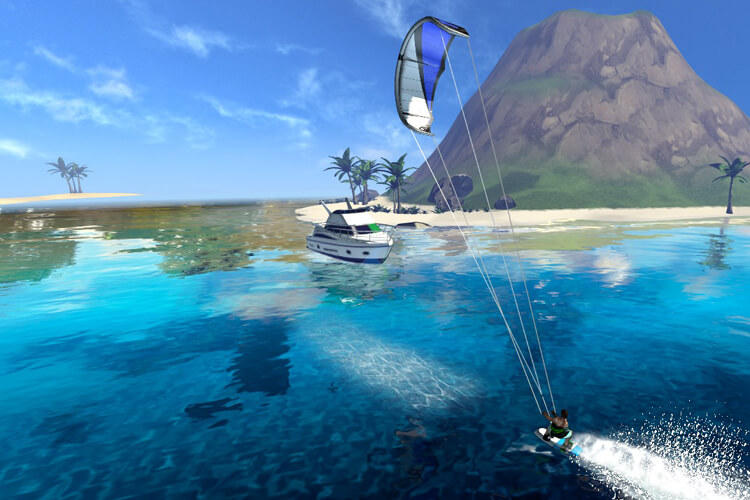 kitesurfing game for everyone

My name is AndrÃ© Klein Martins. I have developed a PC kitesurfing game called “Kiteboarding Pro”.

I am a sworn translator, former IKO kitesurf instructor, and game development has been a hobby for many years.

When I first started kitesurfing I wanted to play a game of kite but there were no titles available. So I decided to create one myself.

“Kiteboarding Pro” is an old project that I started many years ago, around 2011. Over the years I have given up on it several times and ended up losing sight of it.

However, around April 2020, during the Covid-19 pandemic, I got back into the game but decided that this time I was finally going to finish it and release it.

Since then, I have rewritten and implemented most systems, redesigned models, textures, animations and graphics, and worked on them continuously.

“Kiteboarding Pro” – the title is not yet closed – uses simplified kite physics to make it more “playable”.

For example, going upwind is much easier because you can take a much steeper angle. I did this to support the gameplay and flow of the game.

In order to bring more variation and diversity to the tricks, I refrained from fixed animations. As a result, the game’s tips depend on the physics of the engine itself.

Therefore, if you do a trick, it should look slightly different each time you do it, depending on how much momentum you build up after pressing a key.

The hardest thing during development is programming parts of the game that I find boring, like the user interface.

Also, it was important for me to always keep a good performance above 60 fps on my setup.

At one point I decided I wanted to have a huge map with multiple islands. So I had to find ways to maintain performance at all times.

Therefore, optimization is a challenge that always stuck in my head.

How did I integrate the wind and water variables? The wind range can be changed in the game.

The lightest breeze is something like 8 knots, and the strongest wind could be around 40 knots and above.

The size of the kite changes depending on the force of the wind. In addition, small kites are much more choppy than large ones.

At first, for new players, it can be difficult to control the kite and navigate the board at the same time.

I solved this problem by letting the player get used to the controls in light wind first, i.e. giving them a lot more time to react.

Eventually, kite control will become natural – just like in real life – so the player can focus on performing awesome tricks or accomplishing mission objectives.

Regarding water, so far the difference in the conditions of the water is only cosmetic.

That could change in the future, however – I plan to add waves at some point. 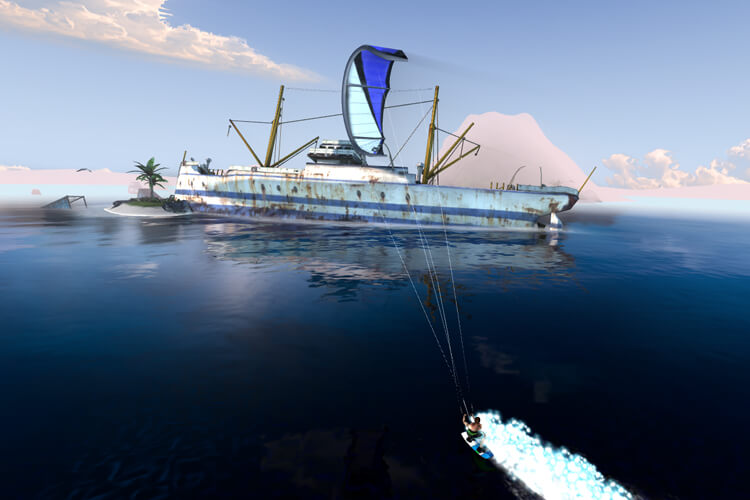 â€œKiteboarding Proâ€ is more like an arcade or semi-realistic game than a simulation, and there are several reasons for this.

First of all, doing a simulation is quite difficult.

If something is wrong, a kitesurfer will notice it immediately. Making an arcade game gives you a lot more freedom in terms of configuration.

Semi-realistic game mechanics allow me to include much more playful objectives that would be totally out of place in a simulation.

The second point concerns the latter.

I want to make the game attractive not only for kitesurfers but also for players in general. At the end of the day, it’s a game, and it has to be fun.

For the simulation aspect, I personally prefer to kite in real life.

To make it an even better game and improve its overall feel, I would like to make some changes to the water conditions.

For now, it doesn’t matter if it’s 10 knots or 40 knots. The water is just plain. So a few kickers and rough water would be neat.

In addition, I put a lot of emphasis on wake style tricks, because it is my favorite kitesurfing discipline.

I guess the old fashioned and hooked up stuff could get a little more love too.

Later, I definitely want to implement at least a few board-off variations.

But “Kiteboarding Pro” already has many features and options powered by interactive artificial intelligence.

There’s also a large exotic themed map with several islands to explore in the Caribbean, tips, cursors, and other physics-based items that can be crushed, like a high-voltage power line.

Finally, you can explore a story mode with mission objectives to accomplish and a freeride mode to wander around and relax.

I have already developed prototypes of additional maps that will be added to the game in the future – an ice map, Portuguese beaches, lakeside environment, etc.

Unfortunately, due to game engine limitations, it is not possible to release the game of kitesurfing on video game consoles.