Laird Hamilton was one of the first watermen to test the kites developed by the Legaignoux brothers. This is how he lived the early years of kitesurfing.

When kitesurfing was born, Laird John Zerfas was already an accomplished wave surfer. His stepfather, Bill Hamilton, was a phenomenal and highly respected surfer.

Today, the Hawaiian athlete-businessman lives in Kauai surrounded by women – his wife and three daughters.

And they all share the same passion for water and the ocean.

Laird learned to swim at the age of two on the north coast of Oahu. Even his zodiac sign (Pisces) is connected to the liquid element.

Hamilton had his first experiences in the waves using a piece of wood or broken surfboards – surfing was an activity for adults only.

But because his stepdad was a shaper, the still active blond haired kid was privileged to have his own board quite early in his life.

The love of sails

Before Laird Hamilton got into wind sports, he tried everything he could – swimming, bodyboarding and bodysurfing have kept him entertained for years.

But he needed something for those windy days and those unbearable flat periods that came in the summer. The answer was “windsurfing”.

“Mike Waltze and Gerry Lopez were the first to use a surfboard for windsurfing.”

“The long, heavy boards made in the early days of the sport were definitely not for me, while the short boards caught my eye.”

Hamilton started windsurfing in the early 1980s, but he continued to pursue his wildest dreams.

When winter hit the Hawaiian island, the young waterman found happiness in the Banzai Pipeline.

Speed â€‹â€‹windsurfer and world record holder Fred Haywood began to hear from Laird Hamilton and invited the California-born adventurer to windsurf in the 50-knot strong wind conditions on Maui.

While enjoying an intense session, Haywood asked if Hamilton would be interested in windsurfing, be sponsored and train with him.

Laird was ecstatic and immediately moved to Maui.

He stayed with Jimmy Lewis and Mike Waltze precisely as windsurfing was exploding and changing rapidly.

Windsurfers were pushing their limits, equipment was constantly changing and Maui seemed like the place to be.

It was the center of the world, a fact that can be confirmed in “AlizÃ©: the Wavesailing movie. “

It was then that Laird traveled to France for his first speed windsurfing competition. He had something to defend – a first or second place in the rankings would earn him a sponsorship deal from NeilPryde.

At first he was not doing very well but in the end Hamilton managed to finish first, broke a world record and got the sponsorship deal.

Bill Roeseler and his kite ski

The sport seemed difficult to set up, and the journeys were short. Bill was walking three meters, then his kite started to fall and sink into the water.

Hamilton was not impressed so he decided to try something completely different.

On his return to Maui, he buys ram air kites from the French brand ITV and hits Ho’okipa with a shortboard equipped with foot straps.

The first experiments were not successful, but they had a lot of fun.

â€œEither we crashed into the water and had to swim to shore with all our gear, or we crashed on the beach, which wasn’t much better,â€ says Hamilton.

“It was like launching a rocket hoping it wouldn’t explode in midair.”

Nevertheless, and because all the equipment fit in a backpack, the new outdoor activity was not abandoned. 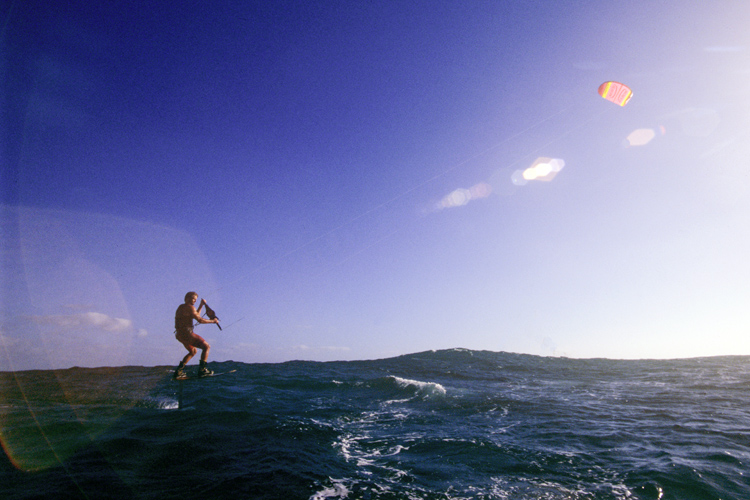 Kites hit the sky over Maui

Meanwhile, the people of Hawaii already knew that it was possible to kite on water.

Bill Roeseler and his son Cory had made some improvements and Laird wanted to be one of the first to try it.

However, he was not deeply impressed – the kite did not have the power of dynamic air kites, and so it stuck to its old formula.

When Manu Bertin came to Maui, Laird Hamilton taught him how to fly a kite using a rope attached to a truck that kept the student from flying through the air and injuring himself.

They trained in the local pastures where the grass was always smoother than the tarmac.

By this time, Laird had already suffered an accident that resulted in a broken ankle. The new sport could be dangerous.

But they all knew that when in the water they needed an inflatable kite that would take off after falling into the water.

Manu Bertin knew an inflatable kite connected to a catamaran in France.

It was then that Manu met Bruno Legaignoux, who provided him with two prototypes: one for Laird and one for Bertin.

Would they be interested in developing a new product for a whole new sport?

Not at all. At least for a while. Because later the windsurfing company teamed up with Pete Cabrinha to produce kite gear.

Laird Hamilton still thinks it was good that things were going this way.

He wanted to focus on the sport as an athlete and be less involved in the business side of things.

The Hawaiian waterman considers that while it was good to witness and participate in the birth of kitesurfing, he prefers to let others develop the products so that he can test them.

Today, Hamilton enjoys the simplicity of stand-up paddleboarding and the adrenaline rush of towed surfing.

However, he was one of the first to practice kite foiling in the early 90s.

From time to time Laird tries his hand at kitesurfing, but now he manages his time more efficiently.

A Waterman with a surfer’s heart

Laird Hamilton says he enjoys windsurfing and kitesurfing, but he will remain a surfer at heart.

â€œRiding a wave, feeling its power and the freedom it brings to you, is at the heart of my life as a waterman. I come back to it over and over again, â€Hamilton notes.

His priority is foil surfing. Because he loves big waves and hydrofoils work great in all types of conditions.

Hamilton sees himself surrounded by water and big waves until he is 100 years old. All he needs is an open mind and an inner fire to move him forward.

“I no longer need to prove anything on these big waves. I don’t want to feed my ego and limit my existence only to that. The ego inhibits inspiration and slows down evolution,” concludes Hamilton.

The story of Laird Hamilton and his involvement in the birth of kitesurfing is presented in “Kitesurfing: From Dream to Reality“